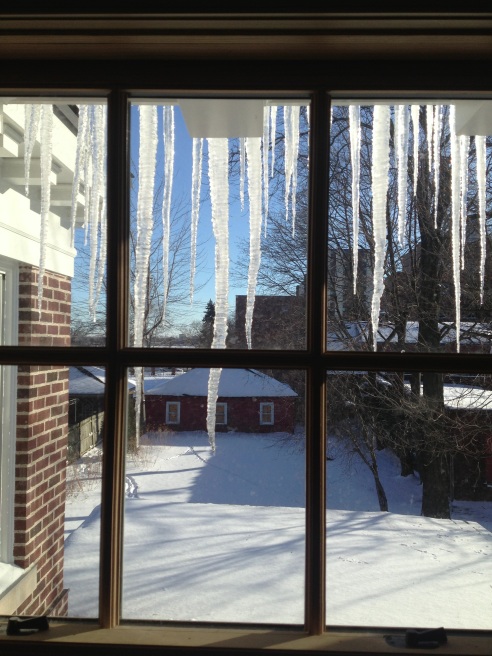 Last week Stacy Cowley came to Detroit for her quarterly visit and to see Matilda in all her glory. This is her story. — Amy

The video tours Amy posted last week had a covert purpose: “I wanted you to know what you were getting into,” she said when I arrived at the house on Friday accompanied by Karl (who kindly retrieved me from the airport) and a stack of supply-jammed shopping bags.

Matilda looks like a construction pit dotted with small oases of creature comforts. The kitchen is mostly functional, but shrink wrap still covers most of the appliances. The floors are coated in cardboard, and the one (two! it became two while I was there!) functional bathroom(s) lack amenities like a sink and a door.

But Amy and Karl’s room is getting closer to being an actual living quarters — minus window shades — and the guest rooms, which were just framing when I saw them last in September, now have walls, finished floors, and brand-new windows. 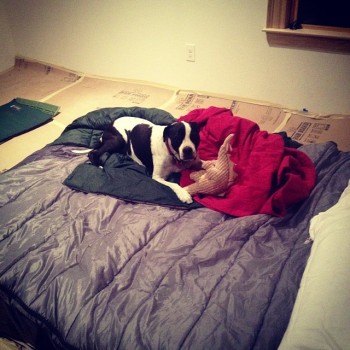 I picked one to claim and pitched the air mattress Karl had just procured. Urban camping!

Just like being out in nature — except in the morning you wake up to construction buzzsaws instead of chirping birds.

Sunday night the big snow hit, and Matilda’s deathcicles grew into death stalactites. That night, my air mattress also decided to spontaneously deflate. Now it was really like camping.

The snow and polar vortex didn’t stop us from having a mini-housewarming party Sunday night, at which we confirmed that Amy and Karl’s new kitchen is big enough to hold almost the entire neighborhood. (Many of the neighbors turned up. Hi everyone, thanks for coming to play with us!) 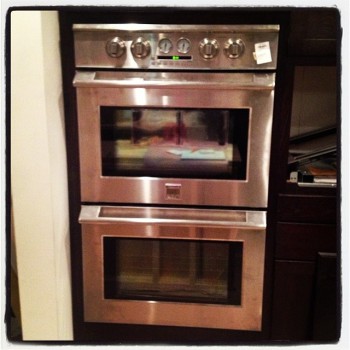 This is our new oven that Stacy tried to kill.

On the upside, it was more of a “hmm, what’s that smell … and smoke …” than an “EEK FLAMES” situation. I did not actually burn down the brand-new house!

The house was is toasty warm, so we didn’t have to worry about the snow, but we woke up each morning coated in a light layer of sawdust. Ah, the joys of construction. 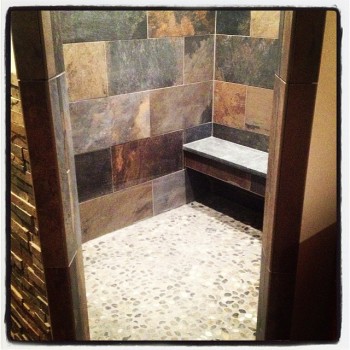 But I could see the progress happening too — like the amazing work on getting the spa-like master bath installed, which was just tape lines on a floor last time I saw it. Also: electricity! Running water! A plugged-in fridge!

The house’s insulation held up fine every night except the last, when the temperatures plunged to -10 and I couldn’t quite get warm despite my three layers of socks, re-inflated air mattress, two comforters and unzipped sleeping bag. I finally found the solution a bit after dawn: pit bulls. I lured Maddie and the visiting Muzzie into my blanket pile and turned my campsite into a heat inferno. Bliss.

Amy claims that next time I come the house might have actual bathroom doors. Crazy talk.