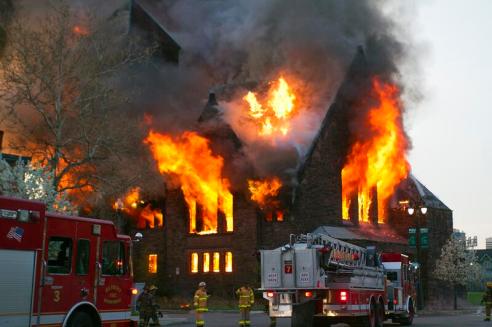 Photo by Steve Neavling of MotorCity Muckraker, who first reported on the fire.

It’s a sad day here in Detroit. The First Unitarian Church on Woodward Avenue was destroyed by fire this morning. It was built in 1890 — 24 years before Matilda — and once was the home of John-LaFarge commissioned stained glass windows that now hang in the DIA.

Of course arson is suspected. I don’t know what to think.

I toured the church with our contractors on a rainy, blustering day last fall. We were told the owner had secured demolition permits and the church was scheduled to come down in the coming weeks. We were meeting an architectural salvage man who had the contract to remove anything worthwhile before the wrecking ball came down. He had the keys.

Most floors were covered in a half foot of trash and debris.

As we stepped into the dimly lit hallway leading to the sanctuary, I stepped into at least six inches of trash and debris. It lined the entire hallway. Used diapers were scattered about, signs of desperate life.

The sanctuary itself was peeling, the plaster collapsing off the ceiling. Many of the windows had been removed, and the church was open to the elements. The bones of an organ lay mangled along the wall. Several of the original light fixtures still hung from the lofty ceiling by thick chains.

And that's why we came … doors.

As we moved deeper into the church, we found signs of residents. A mattress here, clothes there. Some were haphazard piles. Others had been set up pin neat, with someone giving great care to a life that had been reduced to squatting in a church. It started to cry as I thought about the man or woman sleeping on a dirty mattress, with boxes stacked up neatly, acting as a dresser for folded clothes, and rows of pills and brushes arranged on top.

Much of the woodwork was still in tact. Some of it had been tagged, other areas had peeling veneer after being exposed to the wind and rain. But overall, it was gorgeous. There were doors and wainscoting and even the front railing to the church gallery. The basement was filled with pews.

Karl and I were in the market for doors, so we agreed to buy all the of the doors that were salvageable as well as the lengths of wainscoting and the church gallery railing. We felt good that a once-beautiful place would be upcycled to the future.

Our contractors came the following week, along with the architectural salvage agent, and warned all of the people living in the church that it was scheduled to come down within days. They needed to get out. It seemed odd that there wouldn’t have been an official posting or notification before demolition, but I didn’t give it much more thought.

But then the church never came down. I thought that odd, too, but assumed Polar Vortex season was no time to be out handling such a job.

Then things got really crazy. I went on the Craig Fahle show to talk about what it takes to rehab homes like ours. I talked about all of the love — and money — it has taken to move Matilda from a moldering wreck to a still-far-from-complete home. I mentioned on-air that we had salvaged doors from a church on Woodward Avenue that was scheduled to come down.

By the time I got to my desk at work, I had a voicemail from Jennifer Ross at the City of Detroit’s Historic District Commission. She and I had worked together on the plans for the house, her guiding me on everything from door color to whether we could salvage the porch. I thought for sure I was going to get yelled at for mischaracterizing the Historic Commission in some way. Things come out fast and loose on radio, so I wondered what I’d said wrong.

Amy, she said when I returned the call, what church were you talking about on Craig’s show?

(Note: Not in direct quotes because I’m remembering the conversation. I don’t have it written down.)

I didn’t know the name of it, but we did a Google Maps tour over the phone and I showed it to her. I asked her if we’d done anything wrong, and she said no. She just wanted to figure out what was happening.

Apparently, a commissioner heard my interview and wanted to know what was going on.

Jennifer had promised to get to the bottom of it and promptly called me. Once I told her everything I knew, we hung up.

I called my contractors and asked them about it. As far as they knew, the owner had all the permits and everything was above board. The church had burned several times in the past and it was structurally unsound.

I wanted to look it up, but seeing as how Detroit doesn’t have its permitting system online, it was impossible. Even a property-records search is near impossible. When I called the permitting office, nobody got back to me.

I never heard back from Jennifer, so I assumed everything was square.

And then, this morning, just before dawn, the church burned.

It could have been someone’s cigarette or even someone trying to cook a meal on an open flame. Or it could have been a demolition-by-arson situation because the church sits in the footprint of the new stadium district. I’ll never know if the blaze came about because my off-handed comments on the radio alerted the Historic Commission to what was happening, and they stopped the permits. In the end, my radio comments may have saved the wrecking ball but brought on the gasoline.

I don’t really know what the answer is. I am conflicted now about whether we are salvagers or scrappers. We thought we were doing the right thing. The owner said if the doors weren’t removed, they’d just be destroyed.

One way or another, I’m grateful to have a piece of that Detroit history in our house. Thankful that it wasn’t wasted either by fire or wrecking ball. But still I am angry about the fact that the property was allowed to decay to the point I found it in. If there are historical commission protections against demolition (a good thing), why aren’t there historical commission protections against ever letting a property decay in the first place?

Matilda herself is in a protected historic district. And we are glad of that. But there is also a sense that those of use repairing these homes, cleaning up the sins of the past, are held responsible for bringing them back to exacting specifications. So I wonder, where were the Powers That Be when the house was left to rot? Why couldn’t our neighbors get any help in their battle against the Florida investor who let the house become a neighborhood eyesore and trouble zone?

What, can be done to make sure that properties aren’t allowed to disintegrate under the watchful but seemingly powerless gaze of a historic commission? And yes, I know this is a big city and it’s impossible with limited resources to be on top of every property. But you would think that at least those in a historic district — those that have been set aside as having a high enough level of importance that they get demolition protection — would also be protected from scumbuggery.

Detail of that gorgeous trim and wainscoting, which came out of an old church.

The #detroithouse has a party rail! Our wainscoting has a cap wide enough for coffee, beer or wine glasses.

Wait! What's that? The first ever interior door for #detroithouse! #progress

2 Responses to “Matilda and the First Unitarian Church of Detroit”